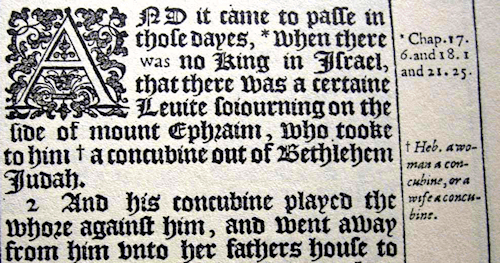 here are 7,342 margin notes in the 1611 King James Bible, and many of these give us an insight into the work of the KJV Translators and the extraordinary task they undertook over just a few short years.

Ways in which the margin notes are useful:

WARNING FROM THE TRANSLATORS

Many of the margin notes reveal many instances where the KJV translators were forced to interpret as part of their translation work. The KJV translators were not always certain that they had made the correct interpretation, and hence the margin note. In the preface of the 1611 they explained that we should not dogmatize on the basis of their interpretation:

…it hath pleased God in his divine providence, here and there to scatter words and sentences of that difficulty and doubtfulness, not in doctrinal points that concern salvation, (for in such it hath been vouched that the Scriptures are plain) but in matters of less moment … in such a case, doth not a margin do well to admonish the Reader to seek further, and not to conclude or dogmatize upon this or that peremptorily? … They that are wise, had rather have their judgments at liberty in differences of readings, then to be captivated to one, when it may be the other.

The notes indicate a desire on the part of the KJV translators to be very accurate and as literal as possible, in part because they sometimes noted matters where the departure from the original language was very slight. However, at other times some departures may seem surprising, such as when their notes reveal that they left out "spirit" in Genesis 7:22. The object of the margin notes is usually to expand the meaning of a single word or short phrase. In some cases, lengthy phrases or in rarer cases an entire verse is rewritten in the margin. The margin notes reveal some italics were inconsistent (though perhaps they should be considered vindicated by the content of the margin notes).

The notes do not include the cross-references from the margins, nor the chapter headings. The notes of the Apocrypha were also not included. To make the notes more user-friendly, they were recreated in modern spelling. When an archaic word in the notes was not recognized, the spelling was left "as is."

The text of 1611 used the symbols † and || in the text to indicate the word or the start of a phrase for which there is a margin note. In the KJV 1611, the † symbol was used when the margin displayed a more literal Hebrew meaning. A || symbol was used to express another way in which the underlying Hebrew could be translated. The notes themselves in the Old Testament start with the abbreviation Heb. for Hebrew and "or" to designate alternative translations. On a few occasions the notes are preceded by "i." or "That is," instead. In some rare cases it was obvious that the † and || symbol should have been moved back a word or two. (i.e., 2 Kings 8:29, first margin note, 2 Chronicles 32:6, etc) "&c." was replaced with the more modern "etc."

† This article was paraphrased from the Literatura Bautista website. The notes listed in the original article are very useful but unfortunately their margin note references contain frequent errors.