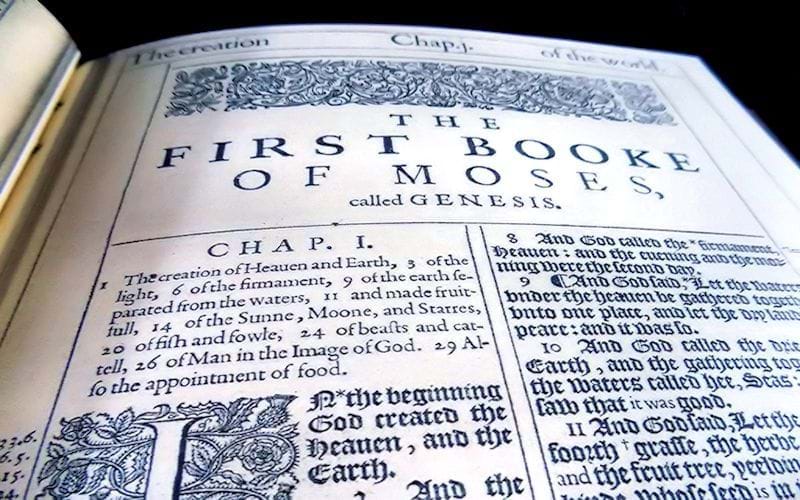 he King James Bible Blackletter Edition was created to deliver an online version of the very first edition of the most widely read Bible in the English language. Most people today have not had the opportunity to see the original 1611 Bible or have the ability to compare it with the King James Bible we use in the present day.

With the technology we have today, we now have the opportunity to gain an insight into the original 1611. For this purpose, the Blackletter Edition was created with all the following features:

It may take a little time to get used to 1611 Blackletter font but, it is well worth the effort. There are many insights to be gained from a study of the original King James Bible and its history.

The Lord gave the word:
great was the company
of those that published it.

The font used in this edition of the King James Bible is the KJV 1611 Blackletter font by Fredrick R. Brennan. The font is a faithful recreation of the font found in the original edition of the 1611 Bible when it was first published. This digital recreation was meticulously photographed from the original and separated into individual characters from which the font glyphs were created.

The original King James Bible was typeset by publishing houses contracted by Robert Barker, who at the time was the King’s Publisher. Barker had a monopoly on the printing of the King James Bible. There seems to be a bit of mystery around who actually drew the font. It looks very similar to a font called alternately “Pica Textura” or “Texte Flamand”, sold by the publishing house of one Mr. Hendrik van den Keere. However, he died in 1580. Some letters, such as "A" and "Y" are notably different than how he would have written them. Another possibility is that the font was made by Wolfgang Hopyl. A third possibility still, is the font was made by Barker, or an associate, in imitation of the styles of those two men; as works printed by them were popular in England at the time. Whatever the truth, the font is beautiful.

The Blackletter KJV 1611 font is licensed under the S.I.L Open Font License.